Alex began his journey as an Osteopath in 2017, graduating from Victoria University with a Bachelor of Science (Osteopathy) and a Master of Health Science (Osteopathy). He’s known for a long time that city living was not for him. Several years living in Canada fueled his love for snow covered mountains and small communities. He moved to Albury as soon as he finished his osteopathy study and is looking forward to a better lifestyle and being closer to the mountains.

Alex enjoys treating all sorts of new or long term neuro-musculoskeletal injuries or pain but gets the most enjoyment out of working with people to help them figure out what’s going on in their body.

In his spare time you’ll find him attempting to tire out his two dogs to prevent them destroying his backyard. Once the dogs are taken care of he could be found searching for balls as he zigzaggs his way down the golf course, riding his bike or trying to predict the snow forecast. He also enjoys camping with friends and is looking forward to exploring some local mountain bike tracks. 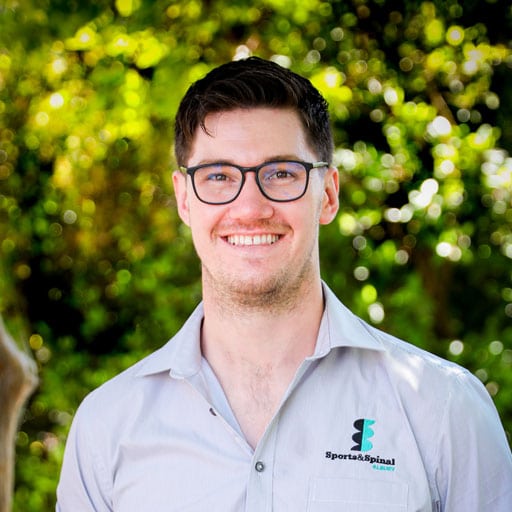 Alex's area of interest is in treating:

Neuro-musculoskeletal injuries & pain.
To make an appointment with Alex, you can instantly book online, us our online chat or call (02) 6021 1975 now.

Comfortably finishing an entire packet of tim tams in a single sitting.

The North Bowl at Revelstoke Mountain in Canada, incredible place to go and feel small before sliding down a mountain.

Movie person more so than books, too many good movies to choose from but I’m always a sucker for old Adam Sandler comedies.

As a lifelong Richmond fan I can’t go past them with three premierships in four years. It’s been a great run!

Although I grew up in Melbourne, I’ve played much more rugby union than AFL.