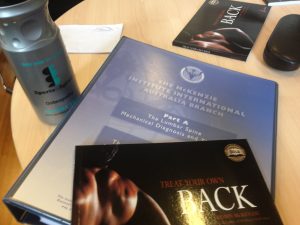 Vaughan recently attended a 3 day course focusing specifically on the lower back or lumbar spine diagnosis and treatment.  With lower back pain being incredibly common in the modern world, this was an opportunity for him to further his knowledge on one of the main presenting complaints at Sports & Spinal Albury.  Lower back pain is incredibly common, with various studies suggesting that 80-90% of us will experience it at some stage in our lives and 30-50% are currently experiencing back pain.  So off to Geelong he headed for the Part A course of McKenzie Method.

The McKenzie Method was “discovered” by chance by NZ physiotherapist Robin McKenzie in 1956 when a client, Mr Smith, presented to his clinic with right sided lower back pain that extended down into his right buttock and thigh. He had undergone the “conventional” treatment of the time which involved ultrasound and heat therapy over three weeks however his condition had not improved. He had difficulty standing upright, could bend forward but could not bend backwards.

Robin McKenzie suggested he go through to the treatment room and lie face down on the treatment table. So far none of this seems remarkable until…………unperturbed by the table position, Mr Smith laid down on the table which had the head end significantly raised (as per the photo opposite) after being adjusted that way for the last client meaning the he was laying with his lower back bent considerably backwards. When Mr McKenzie walked into the room he became quite concerned however upon enquiring about MR Smith’s welfare, he found that Mr Smith now only had central lower back pain and reported feeling the best he had in weeks. This phenomenon of pain moving from his leg to his back was labelled “centralisation” and forms the cornerstone of what McKenzie Method is trying to achieve.  One more session lying in the same position and Mr Smith’s pain had disappeared.

From this chance encounter, Robin McKenzie then spent many years studying what had happened, further developing his theory and refining his practice into what we now know as the McKenzie Method for Mechanical Diagnosis and Therapy (MDT).

The key things Vaughan learnt over the three days are :

– We spend WAY TOO MUCH time in one position. This means we may need to counteract this by exercising our body in the opposite direction.

– McKenzie Method is not just lying on your stomach with your back in extension, although this is a common treatment.  It is about understanding the directional preference for a particular individual and then applying the correct “force” in that direction. Understanding the amount of “force” and how it is applied is something that he has not accurately understood.

– One of the key premises of the McKenzie Method is educating the client on how to help themselves. This has always been one of our key focuses here at Sports & Spinal Albury and why Vaughan loved the course.

– This approach to assessment and treatment is one of the most widely researched physical therapy based methods available meaning there is plenty of research that this can work.

– This may or may not change the way Vaughan treats his clients.  It has given him a more in depth understanding in treatment of certain conditions whilst reaffirming the treatment and advice he has already given his clients previously.

– Sometimes you can get lucky in life……….although the harder Robin McKenzie worked the luckier he got.